Between January 17th and 21st, 2022, I took part in the Acoustic Interiors project in The Hague, Netherlands
The topic and medium of this project is actually an area that I have paid very little attention to and have never worked on as an independent discipline. For me, sound has always been associated with my video work and I have not treated it as an independent medium until now. This was partly due to my irreparable hearing damage. However I am up to try something new and to experiment with the medium sound
The project is based at two locations in the old building Royal Conservatoire and Amare the new culture center of The Hague. I focused on the old Royal Conservatoire building during January 2022 The initiator is NEW EMERGENCES and the curator is the sounds artist Mrs. Anne Wellmer.
In the course of the year the project will be pursued further with events, among project presentations.
About the project
All other participants on location contribute to the soundscape that this one listener experiences. Anything goes: making sounds with objects in the space or with objects and instruments brought to this sonic intervention, using the voice, texts or words in ANY language. The "performers" play with the acoustics of the space, with the resonances, and with the distance to the listener. They come close and move far away. The listener experiences a sonic massage, and makes a binaural recording at the same time.  Each sound composition created in this way can later be experienced by other listeners through headphones, as if they themselves had been that original first listener.
Each time a new location is being chosen, another participants becomes the listener. Ideally as many recordings are being made as participants are present, this way every participant has the full experience. Each recording lasts for about 10 minutes and is also being documented via video.
database of acoustic memories & presentation
The first phase of the project requires the creation of a database with binaural recordings and the exact GPS locations of where each recording was made. In a next step, the recordings are being made available. They can be listened to as is via an online listening archive, but also used to create installations, performances or (headphone) concerts. The form of the final presentation will be determined by the participants.
A building full of stories : The Royal Conservatoire at Juliana van Stolberglaan 1
For 41 years - from 1980 to 2021 - was a special place, for making music, for developing ideas, and for meeting musicians from all over the world. Anyone who - since 1980 - has had the opportunity to study or work in this building by architect Leon Waterman at Juliana van Stolberglaan, will have memories linked to spaces and places in and around the building. Some corners have their own very characteristic sounds: the sliding doors of the main entrance, the hollow slope down on the way to the studios, the intercom where names are being called when study rooms become available, the candy vending machines, or the sound of slamming doors on the corridors along Prinses Beatrixlaan. 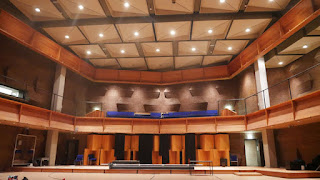 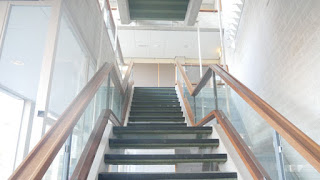 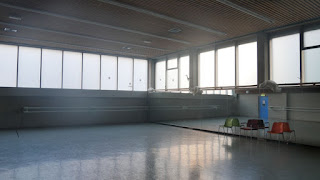 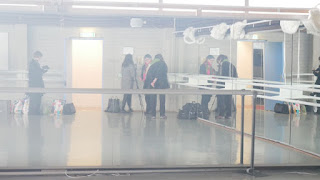